The journal of MySocialRecipe®
Archive

Mysocialrecipe host the contest FIC Jam Cup and recipes that will participate in the next championships of Italian cuisine Fic. 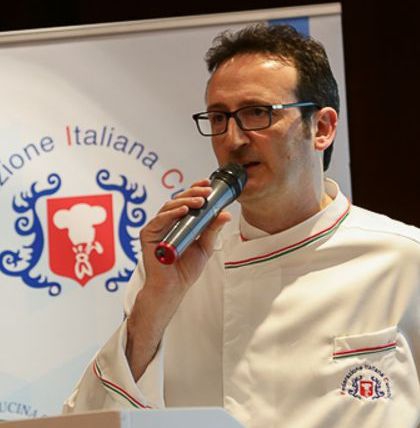 120 provincial associations, 20 regional unions, various associations and foreign delegations, for an average of 20,000 members of professional cooks, chef patron, restaurateurs, teachers and students of hotel institutes of all levels. All this and more is the "Italian Cooks' Federation (F.I.C.), a unique body in its class that claims nationwide dissemination and associative network so pervasive. And the Fic chose Mysocialrecipe, the only registration portal and certification of recipes as a partner. One of the common objective: the good of Italian cuisine and with it the protection of creativity and originality of the recipes that every cook realizes.

A partnership desired because Mysocialrecipe is the only portal that uses a time-certain and valid certification of an original recipe by appending a time stamp issued by Infocert, national validation system used by law firms and accountants and FIC has the "Legal Recognition" as a body which may be the representative in the territory, cooks and those who go on to play professional culinary, by supporting the development, promotion and training. The FIC is also the only Italian Cooks Association to represent the rights of the "World Association of Cooks Societies' (WACS), whose members include more than 70 National Federations on five continents.

A synergy between the FIC and Mysocialrecipe that will create many new opportunities for its customers and prospects, above all, one that will see Mysocialrecipe host the contest FIC Jam Cup for young chefs and dedicated to street food quality and recipes who will attend the next Italian Championships of kitchen Fic.
Archive
The journal of MySocialRecipe®
Newspaper: MYSOCIALRECIPE
Owner: MYSOCIALRECIPE s.r.l.s
Publisher: MYSOCIALRECIPE s.r.l.s.
Director: FRANCESCA MARINO
Periodicity: Bimonthly
Website / Media: WWW.MYSOCIALRECIPE.COM
Registered office: VIA SUAREZ N. 30
VAT no / Tax code / Naples Chamber of Commerce registration: 08187121218
Editorial board: CORSO UMBERTO I N. 90
Registration Register EX L. 47 of 08/02/48
at the Court of Naples - Decree No. 38 of 11/09/18
PEC: MYSOCIALRECIPE@PEC.IT
MySocialRecipe is a newspaper registered in the court of Naples n° 38 of 09/11/2018
Upload your recipe
Upload your recipe on our website and apply for certification
Upload
Take part in a contest
Or join one of our contests with your recipe
Contest